The Chinese have got it goin’ on when it comes to balanced energy and self care. Let’s start with steam rooms. I’d never been in a steam room, and frankly, with the Wuhan temperatures at 106 degrees with 85% humidity, we were pretty much working in a steam room everywhere we went. But, just last night, a colleague said, “Have you used the steam room in the hotel yet?” I said no, not my thing, and besides, I keep trying to find ways to cool down – cold showers more my craving. But, she was persistent, telling me that it’s unlike anything else and will make me feel cleansed and “opened.” And then she said, “you have to stay in long enough for it to work – when you feel you really need to leave is when you have to decide to stay.”

So, this morning, I did a brief workout on the treadmill and then found the steam room, wrapped myself in a towel and went in. It was about 2 million degrees with so much steam that I could hardly find the seats. I wondered if I should write a note with my name and room number in case someone found me steamed into a human dumpling and needed to notify my loved ones. But, just when I hit the moment when I thought, “I can’t stay – it’s too hot,” my body relaxed and I started dripping sweat.

I thought I held out for quite some time, but when I finally left, it had only been about 17 minutes. It turns out that 17 minutes was definitely enough minutes to thoroughly release all the water in my body through my pores – pores I didn’t even know I had. As I toweled off, I realized it was the most refreshing feeling – soft, flexible, relaxed. Amazing. The only downside to the steam treatment is that I discovered it in the last 4 hours of my time in China, so my “openness” will soon be voided by 24 hours of airplanes and airports. But no matter – still totally worth it. 🙂

Also, let me tell you about Chinese foot massage – it’s all about reflexology – a keen understanding of pressure points in your feet and their relationship to other points in your body. It sounds like it would be gentle, peaceful, and not nearly as aggressive as the calf massages I get from Dusty. But, in this case, the foot massage includes not just traditional massage and pressure, but a whole bunch of slapping and pounding and wriggling. A bunch of us were treated to traditional leg massages in Wuhan (thanks to Claire Du’s incredibly generous mom!) and the entire experience was memorable – it was late at night (about 10pm), with a Chinese soap opera on the tv above our heads, and four of us getting slapped and pounded, which led to a whole bunch of laughing or gasping depending on what was happening. The funny thing was that when it was over, we were transformed – we couldn’t stop talking about how great we felt, in spite of the abuse, and have been actively trying to figure out how to get one more shot at it before we board planes later today.

I have managed to keep running throughout this trip – not the distances I need for endurance, but on the treadmill almost every day and my feet seem to be holding up well! I have to think that my feet might be healing, in spite of the continued workouts, and I’m hopeful that I can clock an 8 miler without too much discomfort when I’m back on the roads of mid coast Maine.

Check out this brief video of our foot massage experience – only my leg shows in the video in order to protect the identity of my colleagues. 🙂

And, not really anything about running, but a cool photo of the Shanghai skyline … 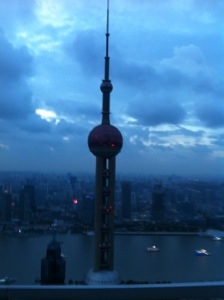 So, I am a wee bit more than half way through my trip. Wuhan is one of the hottest cities in China, and it’s been a cool 106 here during the day. So, even though the air quality is better than Beijing, it’s hot, hot, hot. The Old Port Marathon weather has got nothin’ on the weather here in Wuhan.

But, today, when I woke up early and looked out my hotel window onto the Yangtze River, I knew I couldn’t spend my time on a treadmill. I had to go outside. To hell with the heat.

It was nice to land my feet, one in front of the other, and actually GO somewhere… but even better was what I saw along the way…. I’m not sure of the cultural tradition, but certainly, 5:45 a.m. seems to be just the right time for the mature part of the local population to emerge and begin their morning exercises outside. I was flanked by music, pods of folks doing tai chi, swimmers, and then… an exercise park! Chinese men and women, easily a full generation older than I, were getting it done on swings, rowing machines, and other pieces of equipment that I didn’t recognize. Impressive.

(I learned that turning on the VPN is a solid way to outsmart the prohibition of FB so I’ve got some good shots for you in the blog this time!)

In the first photo, check out the woman hanging from her toes flanked by the woman getting in a good stretch and swing right next to her.

Then, a couple of videos highlighting tremendous strength and balance, games, and lovely tai chi.

In the 2nd photo, notice the guy swimming past the small fishing boat that had just arrived, and then below that, you’ll see a bunch of folks checking out the fish catch.

An absolutely awesome start to my day. 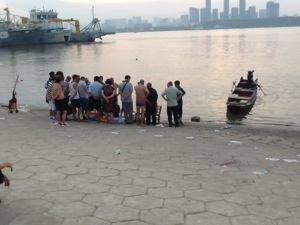 Finally, I would just like to mention that though this has nothing to do with running, I ate duck tongue, frogs, and turtle (or at least it was in the turtle family) today.

I’m going for the river run again tomorrow morning before heading to Shanghai. I’m not actually getting too much mileage on these runs because the sights are just too good to run past – so there is a lot of stopping and starting. Good for the soul, if not for the endurance training.

I'm squarely middle aged, mom of two grown daughters, with a full time job. My lifelong activity had been horseback riding, but with the calendar complexities of my job and family, running became a way to stay fit, no matter the schedule, and it's FREE!