Before I get to the running update, you need to watch this video of a starling swarm that Ellie and I saw this evening. It was so much bigger than I could get with my phone. I’m pretty sure that the lead starling was pretty unclear about where to go and all of the thousands of followers were like, “Dude, ever heard of Googlemaps? Puhleeze.” Definitely looked like a directionally challenged group of birds.

I am fortunate enough to spend the weekend in Gettysburg with my daughter, Ellie, who is both a sophomore at Gettysburg College and a member of the cross country team. Today, we both had sports battles.

Actually, Ellie has been battling injuries for over 18 months. She spent most of the summer in physical therapy and returned to the fall season with a training protocol that limited running to 5 min at a time. Not the ideal scenario to train with her college team. But Ellie, like me, can get fixated on what she wants and, this case, it was getting into a race before the end of the season. She raced for the first time two weeks ago, and then again this weekend. Today, she battled her injuries and her fitness level to crush the race. Impressive showing. Here is a photo of Ellie slammin’ the finish line:

Crazy Land, by the way, has a national reach from what I can tell. At least, it’s got a strong foothold in Pennsylvania college athletics. The men’s teams were running an 8k and the finishers were coming through at about 25 min. Super fast. And super sick. Once the leaders made it through, they collapsed, vomiting on the ground only to cause a traffic jam for the bunches of guys coming in behind them, many of them with the same results. At one point, there were about 12 guys heaving onto the grass. Nice. CRAZY.

As for me, I followed Janet for a fast 5 miles on Thursday morning (negative splits in the last two miles – UPHILL) and recovered by spending 10 hours in the car on my drive to Gburg the next day. However, the sedentary time made me pretty stiff. So, this morning, when I had to get up and head out for 12 miles, I wasn’t feeling very positive.

Also, I’d like to say that it is much darker in PA at 7 in the morning than it is in Maine. I was planning to start my run by 6:30 a.m., but it was too dark and I didn’t have reflective gear with me, so I had to wait until 7:15, which was still kind of a dark start. The problem with starting at 7:15 is that I had to really, really be finished by 9:15 so that I’d have time to get back to the hotel, shower, and then get back to the College in time to see Ellie race at 11… and leave enough time to find a parking place on a day when then the College was hosting multiple athletic events and an admissions Open House.

My run included battles with cramps and hills.

Of course, the number one thing for my whole day was to see Ellie race, so I had an extra spring in my step once I got going to be sure I’d be back in time. That was good. I ran a pace 20 seconds faster per mile than my average of late. Bad part was that it called the cramp into action before I was finished. I’m tired of battling The Cramp.  (And, in a small aside, this area does not seem to support the morning athletic bunch that I encounter in Maine…  I didn’t see another runner until mile 9.5 and he was the *only* person I saw. No bikers at all, which is odd, because I would have expected the hilly terrain to be candy for the crazy bicyclists. Nope. ) Nevertheless, I got my 12.7 done, lickety split, then back to the hotel, showered, back to Gburg, just in time to park far enough away from the race start that I had to RUN to get there. (I was not hoping for another run opportunity today, but it was worth it!)

As I write the blog week after week, I’m noticing a pattern of commenting on beautiful scenery. Maine is not the only state to deliver. Ellie told me that there weren’t any hills around. I think what she meant was that there weren’t any hills on campus, because all the hills were right there in the battlefields that I ran around for 12.7 miles. Good thing the scenery was this good – it made me not care so much about the hills: 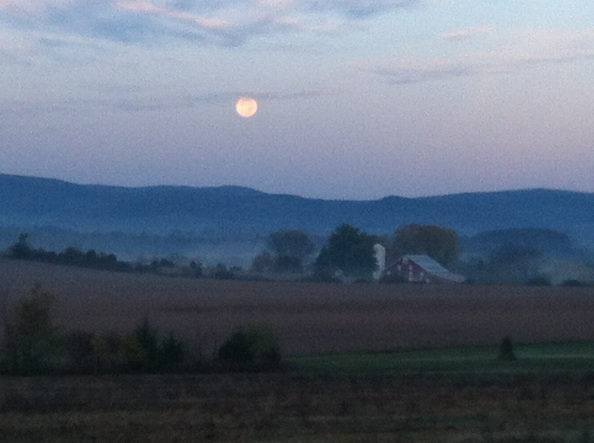 So, today’s 12.7 was my “draw back” distance in between long runs. Next weekend is 20 miles. I really, really need to kick the cramp. I’m not kidding when I ask for suggestions. Three weeks in a row has me worried that my muscles have “muscle memory” and I absolutely need to wipe the memory clean before next week’s 20 miles!

Ellie and I both ran hard today, so we definitely patronized the local Dairy Queen for some tasty blizzards. Saweet!

This has been a nutso week for Janet, Margaret, and me, so I really don’t know what everyone is doing for their workouts – Janet will probably go longer than her training plan says and Margaret will squash in some amazing workout tomorrow that will keep her up to date.

I'm squarely middle aged, mom of two grown daughters, with a full time job. My lifelong activity had been horseback riding, but with the calendar complexities of my job and family, running became a way to stay fit, no matter the schedule, and it's FREE!